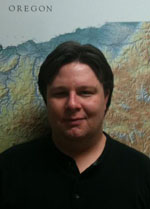 Fonstad has co-authored edited volumes on the subjects of Complexity in Geomorphology (2007) and The Remote Sensing of Rivers (2010). Some of Fonstad’s more notable publications include the HAB Transform for converting images of rivers into maps of water depth (Fonstad and Marcus, Geomorphology, 2005), measurement and understanding of the spatial variations of mountain stream power (Fonstad, Geomorphology, 2003), mapping and modeling of treeline ecotones (Resler, Fonstad, and Butler, Geocarto, 2003; Resler and Fonstad, The Changing Alpine Treeline in Glacier National Park, Montana, USA, 2009), a cellular automata model of instream hydrodynamics (Parsons and Fonstad, Hydrological Processes, 2007), the use of cellular automata in linking geomorphology and ecology (Fonstad, Geomorphology, 2006), and the critical riverbank conjecture, for which he received (with W. Andrew Marcus) the AAG’s 2005 G.K. Gilbert Award (Fonstad and Marcus, Annals of the AAG, 2003). His more recent work has focused on the high-resolution remote sensing of river habitats, modeling of river dynamics and ecotones, and hydrological work on the upcoming NASA SWOT satellite In January 2010, Mark became the Environmental Sciences associate editor of the Annals of the Association of American Geographers, and is the editor of the Annals’s upcoming Special Issue on Water (2012).

Fonstad has taught undergraduate courses in Introductory Physical Geography, Hydrology and Water Resources, Fluvial Processes, Geomorphology, and Remote Sensing. He also has taught graduate courses in Environmental Systems Analysis, Geocomputation, Remote Sensing and Environment, Advanced Geographic Research Design, and Applied Water Resources. He supervises graduate students on subjects such as the fusion of physical geography, environmental geography, and GIScience, as well as the intersection of physical geography with issues of sustainability and hazards.